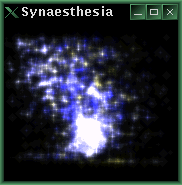 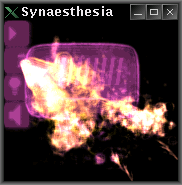 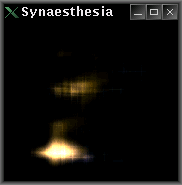 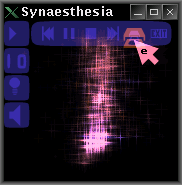 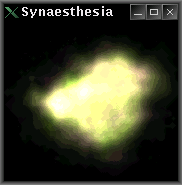 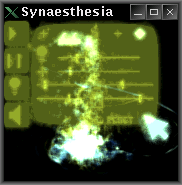 2013-10-19 - This software is getting a bit long in the tooth, and I haven't found time to update it recently. If you want to adopt and modernize it email me! If you want to reimplement it in a modern language such as HTML5/JavaScript, email me about the algorithm details, it really is the simplest algorithm in the world!

To use Synaesthesia with a modern Linux system (eg Ubuntu) which uses PulseAudio, I suggest running

Start some music playing in your favourite medial player, then using the PulseAudio Volume Control (pavucontrol on the command line), in the "recording" tab, set "OSS Emulation[synaesthesia]" to take input from the appropriate "Monitor" source.

Synaesthesia is a program that gives a graphical accompanyment to music. Anyone can make some pretty piece of graphics that flashes in time to the music, Synaesthesia manages a wee bit more sophistication. The screenshots to the right don't really do justice to the display, which writhes in tight synchrony to the music you play.

Synaesthesia's display combines information about the frequency, location and diffuseness of sound. The display is sufficiently detailed to let you distinguish several individual instruments, singers, or special effects on screen by their location, shape and color, and sufficiently fast to distinguish individual drum beats and notes.

Synaesthesia works well in tandem with EsounD based mp3 players, such as XMMS.

Source code for the latest Linux and FreeBSD version:

Thanks to Nils Desle, there is a Windows version:

Note: this may not work on Windows XP. Also it's a fairly old version, without some of the newer effects. If you want to port the latest version to Windows, feel free. That's why it's GPL!

Zinx has converted Synaesthesia to an XMMS plug-in:

For those interested in writing their own sound software, I recommend the book by F. Richard Moore (1990) called "Elements of Computer Music", which covers a great many topics in a very readable style. Now if only I'd found it before I wrote Synaesthesia...