You're in a desert walking along in the sand when all of a sudden you look down, and you see a tortoise, it's crawling toward you. You reach down, you flip the tortoise over on its back. The tortoise lays on its back, its belly baking in the hot sun, beating its legs trying to turn itself over, but it can't, not without your help. But you're not helping. Why is that? 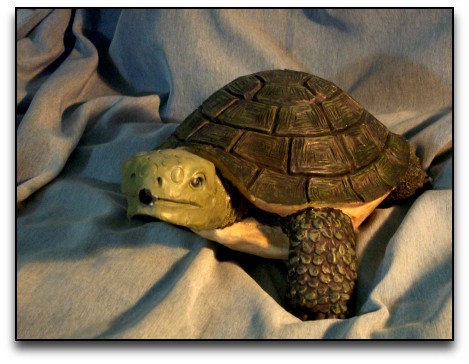 This is an electronic tortoise. A replicant tortoise. It has a motion sensor in its mouth. When it senses movement, it sings its song. Then it sings it again. And again. Who made it? Who decided that it would be a good idea to manufacture plastic singing tortoises?

The picture above is the Mark I Electronic Singing Tortoise. I was later given a Mark II Electronic Singing Tortoise. This model is capable of autonomous movement. After lulling the victim into placidity with its siren song, it begins walking towards the victim, then extends its fearsome head and begins gnashing its teeth. I will not display a picture of it here, as its mere sight has been known to induce madness.

More disturbing still is the Tortoise with the Pneumatic Tongue, which recently arrived unannounced outside my door. It has a tongue that is capable of extending several times the length of its body!