I have been working on a successor to my tile layout app Ghost Diagrams, which I am calling Ghostsurn. The novel feature of Ghostsurn is finding not just a valid example of a tile layout, but a properly random sample from the set of all possible layouts. 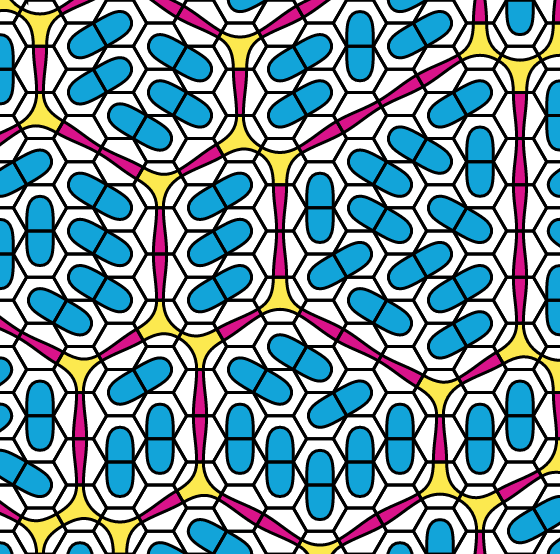 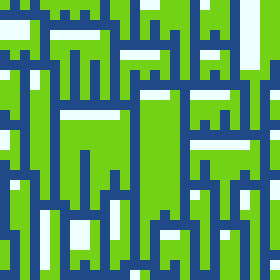 Updated 2021-06-04: The k-means++ implementation I was using previously appears to have been flawed. I've updated results using a better implementation.

The above report focusses on R. @ctwardy has replicated the basic result here and done some further exploration in Python.

Updated 2021-06-19: Added Appendix 2, sketching an argument that the asymptotic density of k-means++ is optimal.


For a collection of points, the k-means algorithm seeks a set of k "mean" points minimizing the sum of squared distances from each point to its nearest mean. k-means is a simple way of clustering data. It has a fast approximate algorithm to find a local optimum, but this might not be sufficient for the application I am talking about here, which needs something like a truly global optimum. It can also be viewed as a way of approximating a dataset using a smaller number of points, even if it does not consist of distinct "clusters".

I've recently become interested in the behaviour of k-means for large k. What is the distribution of the means compared to the original distribution of vectors, as k becomes large but assuming n is always much larger?

In one dimension Wong (1982) has shown that the density distribution of means is proportional the cube root of the original density distribution. Raising a density to a fractional power such as here 1/3 has a flattening, widening effect. Peaks are lowered and tails are fattened. After some rough calculation (see end), in d dimensions I believe the distribution will be proportional to the original distribution to the power d/(2+d). Altering the distance metric (k-medians, etc) I think will result in a different power.

So, for any collection of things where we have a notion of distance, k-means provides a way to flatten and summarize the distribution. (If we don't want to interpolate, we could limit means to members of the original collection.)

In a collection in which most of the variation is only in a subset of dimensions I think the effective d will depend on k. For example, for moderate k the effective dimension might be 1 or 2, but for large k one gets into the fine structure, the effective d rises, and the flattening effect is reduced.

This idea of flattening a distribution seems useful, so an algorithm that does it is exciting:

It also seems reminiscent of Wikipedia pages, which tend to cover all the major opinions, not including wild theories but also not entirely focussing on the dominant theory.

Update 2020-10-24: I've applied this idea by clustering 2020 bioRxiv abstracts. This uses a "greedy" variant of k-means where means are optimized one after the other. In other words, it is an ordered list in which topics become progressively more specialized. The algorithm I used also has fairly good ability to escape local optima.

Further note 2021-03-23: The usual k-means algorithm performs very poorly at finding the global optimum, or even at producing clusterings with the expected properties I have described the global optimum as having. Some improvement may be obtained by initializing cluster membership using Ward agglomerative clustering. In R, use fastcluster::hclust.vector() followed by cutree().

Appendix: A very rough examination of what happens in d dimensions.

Out of k, how shall we allocate the means to the two hypercubes, k1, k2=k-k1?

Within a hypercube, the distance to the nearest mean will typically go proportional to k^(-1/d).

where c is some constant.

Within two hypercubes we would have

Assuming k is large enough that we can treat it as effectively continuous, find the minimum by differentiation:

This shows how k means will be allocated between two regions of differing density. Between more regions, each pair of regions will be balanced in this way.


With everyone using video conferencing a lot more, I have a couple of things on my wishlist.

1. Get the latency down. For my home DSL, it's around 250-500ms. In air, the latency is about 3ms per meter. So there's about two orders of magnitude improvement possible to match in-person meetings. I think each order of magnitude improvement will give qualitative gains. This might need a rethink right down to the hardware level. Our current packet-based approach to networking could be replaced by circuit switching. CPUs could be more about having many cores dedicatied to specific tasks. Audio compression can be done at low latency using prediction rather than block-based Fourier transforms*. Maybe something similar is possible for video?

2. Shared virtual space. The monitors should show the projection of this virtual space from the point of view of the viewer. Depth of field estimation seems to be solved, and for example Apple's new phones seem to be able to do it even with a single camera.

* I know from my old Bonk project that a predictor based approach can perform similarly to tranformation based lossy compression -- i.e. errors have the same frequency envelope as the signal and are perceptually hidden. Bonk is still packet based, but I'm sure a very low latency streaming version is possible.

This is a somewhat extended talk I gave at the Walter and Eliza Hall Institute. It goes into some more details about how confect values behave. The gene-set enrichment section is also an improved method that uses an effect size that is a linear function and no longer needs bootstrapping.

These are slides for a 15 minute presentation on my topconfects Bioconductor package, for BiocAsia 2019.

New material for this presentation is the application to gene set enrichment measurement.

This slideshow places my Topconfects method in the wider context of the current debate over the use of p-values.


This is a small improvement on the log transformation we use in RNA-Seq and scRNA-Seq. 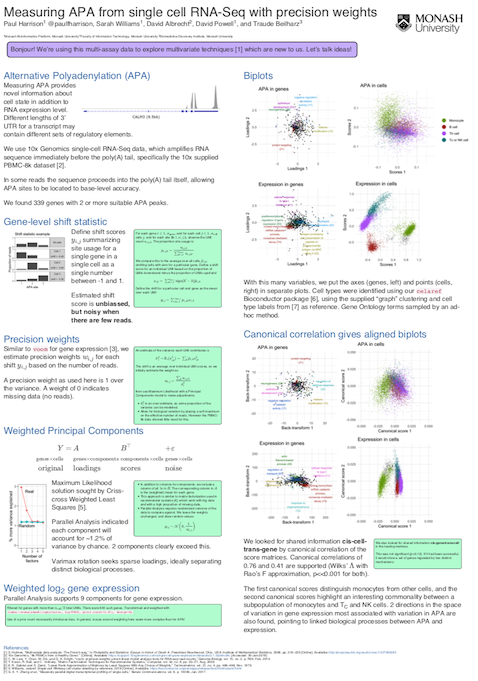 Poster for Lorne Genome conference 2019, looking at single cell data where each gene can produce two measurements: RNA expression level and choice of polyadenylation site. We're not exactly sure what the correct tools for analysing this data are yet, this poster is plays with weighted principal components and canonical correlation. I'm interested in expanding my use of multivariate techniques, there are whole histories of unfamiliar techniques, such as techniques from ecology and Exploratory Factor Analysis methods used in psychology and marketing. Apparently multivariate techniques are particularly popular in France. 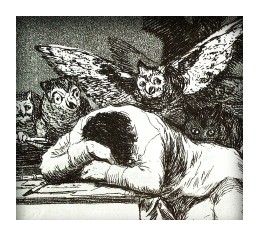